No, the mission began a long time ago and we are also on board. Canada, Munich, Kiel, Cambodia, Rio, Beckum. The world is small. Too small for countless tons of plastic waste on the world’s seas and rivers.

The order in which the countries and cities are listed is not randomly selected. That is the route taken by the Munich IT entrepreneur Günther Bonin (63) a good 10 years ago and, as a former IT entrepreneur and passionate seafarer on a voyage in Canada, when, for the first time, stumbled across increasing accumulations of plastic waste and in 2011 founded the environmental organisation One Earth – One Ocean (OEOO) headquartered in Kiel.

Today it has become a company that not only thinks sustainably, but has also created jobs in addition to the first operational assignments in Cambodia and Rio. “We have already been able to help families a lot in Cambodia. Sometimes the children slept under a wooden shed surrounded by garbage. Today, they and other employees have a permanent roof over their heads and there has also been a rethink in their minds about avoiding waste”, reports Bonin. Of the 2000 tonnes of plastic waste produced in these regions, just 700 tons were previously collected.

Part of the “Maritime Waste Collectors” is three types of boats, the SeeHamster, which was launched for the first time in September 2020 at Tuttenbrocksee using the Möllers Packaging Technology conveyor technology to fish out plastic waste. This conveyor was developed by the Möllers Packaging Technology in cooperation with registered charity OEOO e.V. and is intended to automate the process of garbage collection on board and thus relieve the workforce on site.

With the larger SeeKuh they are already out and about in rivers and port areas as well as in coastal areas and at river mouths. "There we fish at the source, exactly where the plastic waste first accumulates before it drifts out", adds Bonin (OEOO). But unfortunately that still happens inexorably and that is precisely why the ocean-going elephant is the big brother of the fleet. A feasibility study was drawn up for the SeeElefant, and it was awarded the ECODESIGN Prize in 2019. The pilot system is scheduled to start in 2021. And if everything goes well, the SeeElefant will set sail employing Beckum technology!

Above all, the sustainability concept that has been driving us for many years. It is a crucial subject close to our heart to support this and similar environmental projects also in the future. 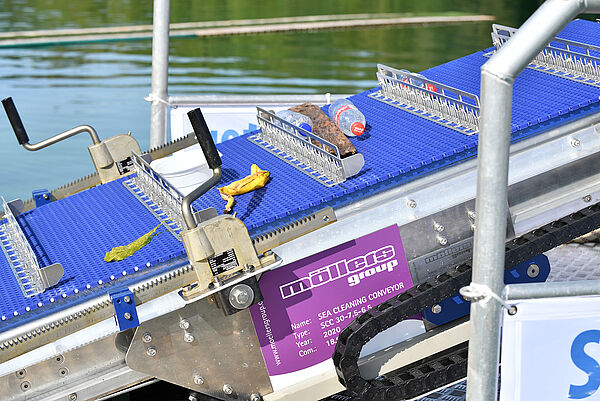 After the pilot test, it could soon look like this in real life: The Möllers Group's conveyor belt on the SeeHamster fishes plastic and other garbage out of the water.